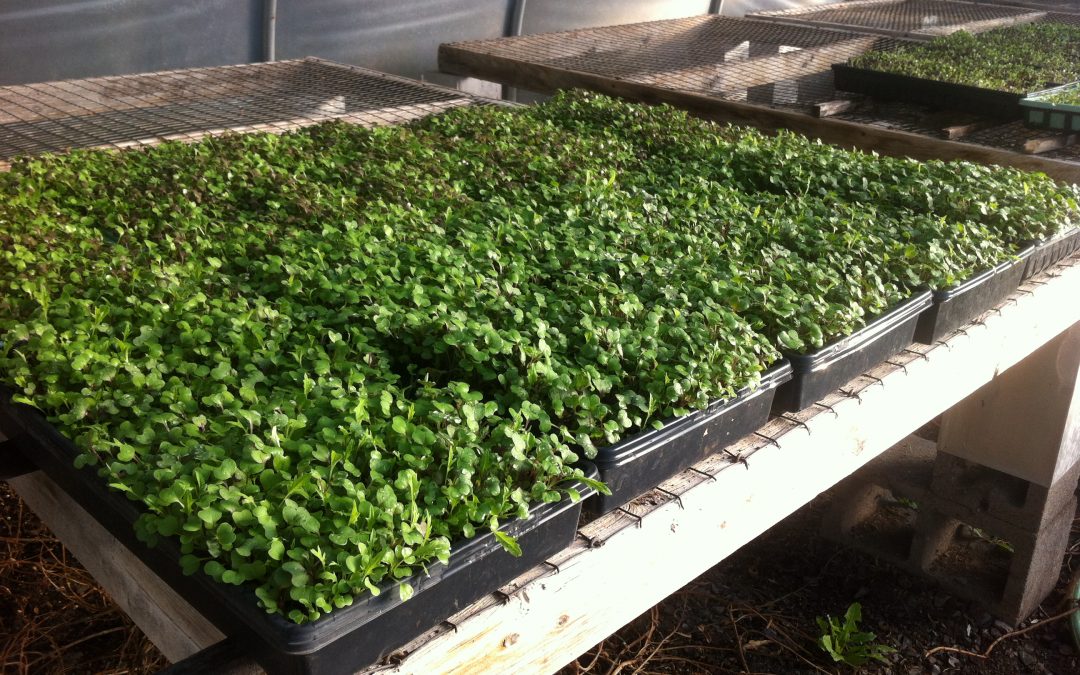 Proposal: Explore the viability of producing micro greens on a small scale. The minimal input of worker hours and materials combined with the resulting high value product will hopefully find this technique financially sustainable.

Execution: I plan to order 4 varieties of micro greens to trial in small quantities and establish a weekly seeding and harvest cycle. Ideally harvest will take place on Fridays and/or Saturdays after work for the weekend markets. The seeding date will be approx. 10 days before harvest, possibly changing with experimentation. I will seed into soil filled trays (old trays in seed shed) and experiment with different modes of covering (soil, vermiculite) and determine which yields best results. I plan to start with 2 trays of each mix and one tray each of the herbs, 6 total trays, and adjust the scale of output based on yield and market feedback. I expect 1 tray to yield about 4-6 half pint clam shell containers. I will keep records of production costs and sales to assess the viability of the project and whether it could be expanded to include more varieties/output.

Summary: Having completed a season growing micro-greens, my overall conclusion is that it was financially viable on a small scale. The project ran for 20 weeks in total, with an average labor input of an hour a week. During the course of the project I developed and refined the system of production until I finally got it to a place I thought acceptable. The main issue I was dealing with was poor germination and low yield, both of which I feel I eventually got a handle on. See the Notes section for more details.

Below is an overview of the finances of the project. I’ll use the term “unit” to mean 1oz. of micro-greens packed in a clear plastic clamshell.

Initially production was inefficient due to issues of poor germination and irregular yield. Since generally we sold out and were often only supplying one market, it is reasonable to expect increased sales without necessarily increasing production but by applying lessons learned this past year to increase yield. Even despite these issues starting out, the enterprise proved to be financially viable.

Seeding and Germination– My basic technique for seeding was to broadcast seed into soil filled trays and cover with a thin layer of soil. I used the same potting mix that NSF uses for its seedlings as my growing medium. Seeding was done regularly on a weekly basis to ensure a constant supply. I struggled for a long time with irregular germination, every week varying the process slightly and taking notes on results. Eventually I started using a technique I found here where you stack the trays after watering to create a humidity trap. This technique worked great! I didn’t have any trouble with germination after switching to this method; I only wish I discovered it sooner. One thing to watch out for is to un-stack the trays at the right time, I was a day late once and lost a few trays worth of micro greens which had grown into the bottoms of the next tray in the stack.

Harvest– I harvested after first set of true leaves developed. Harvested using sanitized scissors into a clean rubber bin and packed the night before market, then refrigerated. 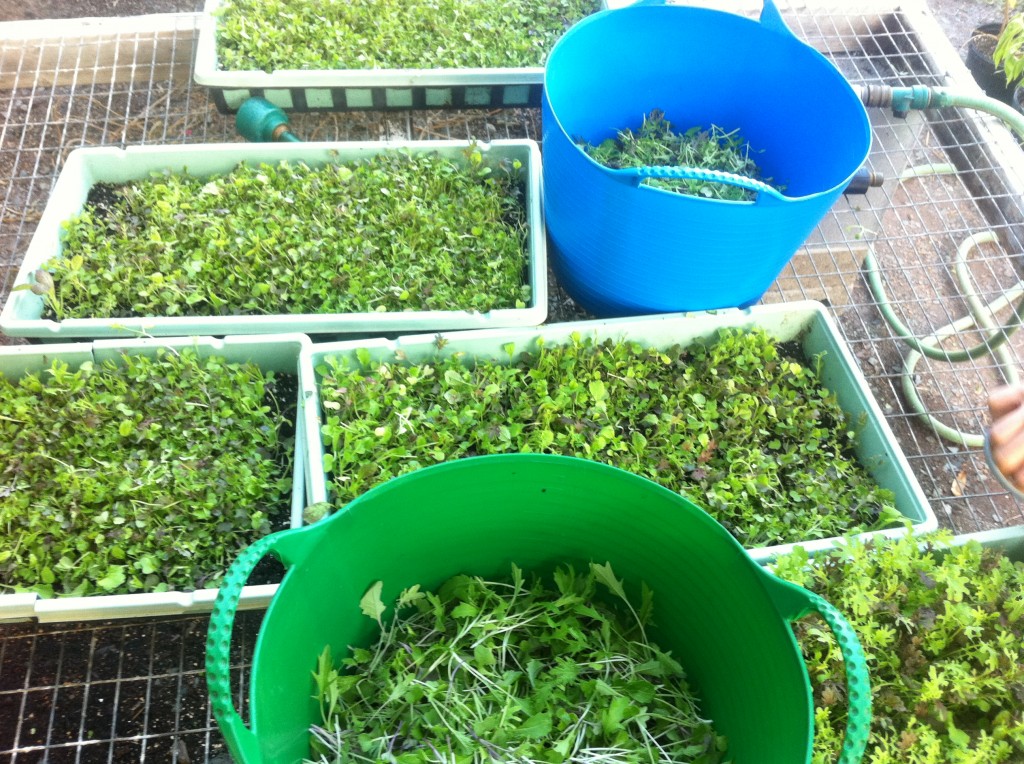 Greenhouse Space– Space wasn’t an issue as the project was started on 6/23, after a lot of space was freed up in the greenhouse. If done again next season, could maintain this size operation on a single table, although having a sunny spot is vital.

Seed– Initial ideas of having a large variety of micro green types didn’t seem practical when faced with reality. The key to having this be profitable on a small scale is keeping worker hours low, and uniformity in the process helps achieve that goal. A large selection of varieties, each with different needs and days to maturity, adds complexity. I settled on two mixes, one mild and one spicy, with similar requirements.

Using what I’ve learned this past year will mean an improvement in production. To make the most of this increase some marketing work can be done. Giving out free samples early on at market could help increase sales and introduce customers to the product which they may not be familiar with. In addition, I found bringing un-harvested trays to market for display was aesthetically pleasing for the stall as a whole, attracted attention to the product, and introduced the costumer to more of the process of growing the product.

This site uses Akismet to reduce spam. Learn how your comment data is processed.